The parish of St Oscar Romero, Blackburn was created at the end of 2018 when the three former parishes of St Peter in Chains, St John Vianney and Our Lady and St John the Baptist (known as Pleasington Priory), ceased to exist as individual separate parishes and the three churches became incorporated into the new parish.

Mass times are as follows:

Sunday 9am
Monday 10am
Friday 10am

Sunday 10.30am
Wednesday 10am in St Paul’s School during term time; at The Priory when the school is unavailable.

The oldest of the parish’s places of worship , Pleasington Priory was opened in 1819 and so has a … END_OF_DOCUMENT_TOKEN_TO_BE_REPLACED 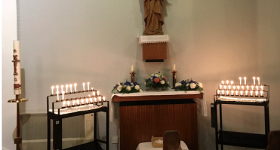 This sculpture is by the British artist, Rory Young.

Oscar Romero (1917-1980) was made Archbishop of San Salvador in 1977.  This was a time of great political conflict within San Salvador, with electoral fraud, cover-ups and state-sanctioned violence rife. Romero began to speak out against the injustice inflicted on the poor and oppressed, and quickly became a target himself.  He built up an enormous following, broadcasting weekly radio programmes where, in addition to his sermon, he listed politically motivated deaths, tortures and disappearances.  He demanded justice and set up legal aid projects to support the victims of the violence. Aged 62, Oscar Romero was shot by a sniper as he celebrated mass.  He was declared a martyr and canonised in 2018.

Archbishop Oscar Romero was canonized in Rome on 14th October 2018 and so is one of the most recently created saints.

On 23rd March 1980 in his homily Oscar Romero ordered the army to stop killing people. ‘In the name of God , and in the name of this suffering people whose cries rise to heaven more loudly each day, I beg you, I implore you, I order you, in the Name of God , stop the repression!’ The next day, he was shot while celebrating mass.

Fr Shaun Braiden is our Parish Priest. He arrived in the summer of 2018 and has had the task of steering through the merger.

Our mass times are shown on the right; any changes will appear in the weekly newsletter.

Wednesday 10am in St Paul’s School during term time; at The Priory when the school is unavailable.